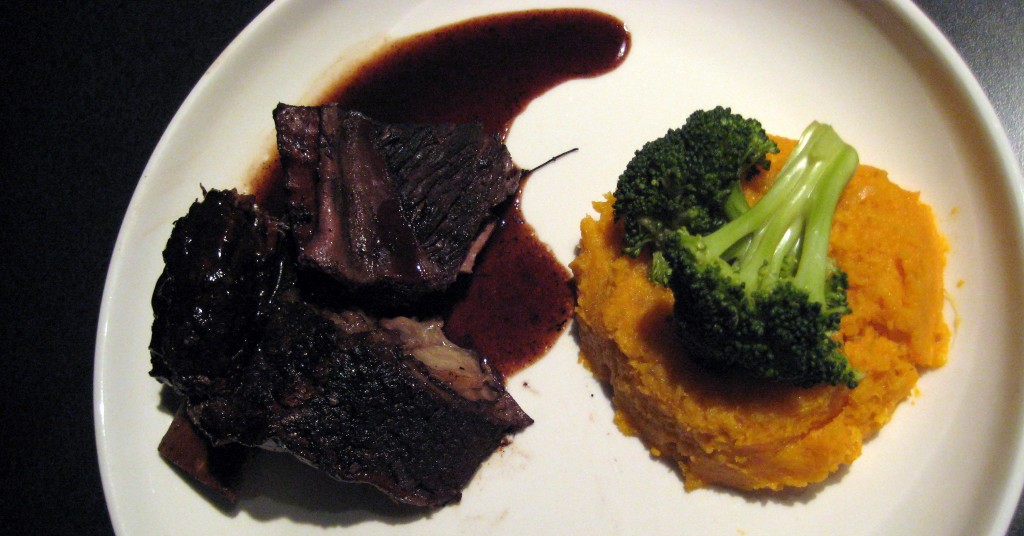 Second Time’s a charm?
So this is my second go-around with braised beef short ribs – I LOVE this dish.  Last time was great, but I couldn’t stop thinking about the ways I could improve on my first attempt, now that I had a bit of experience with braising and in particular with this cut of meat.

This time around, I had spent quite a bit more time reading up on braising and different recipes, plus I’d gotten a few more tips and tricks from FineDiner Eric, and I felt I was ready to jump back in and see if I couldn’t hit this one out of the park.

The first big improvement this time was in the quality of the meat I used – Eric turned me on to this place in Navan called Lavergne Western Beef.  The beef was great quality, and the price was amazing compared to what I’d paid previously at a local butcher shop.  It’s a bit of a drive, but well worth it.

The other thing that I did differently this time was I marinated the beef overnight in a tupperware container with some chopped up veggies, some herbs, and almost a full bottle of GOOD red wine (as FineDiner Danielle said, these ribs were HAMMERED).  I think the quality of the wine would really affect the final outcome here.  You don’t have to break the bank or anything – the bottle I used was a $26 Chianti – just make sure you buy two bottles so you can drink some with the meal!  As you can see from the pictures, the marinating really brought an incredible dark colour to the beef and the flavours and texture were just amazing.

The last piece of the puzzle was that I had some really great Veal Stock that Eric had made earlier in the week – this stuff was so flavourful, it really made this dish stand out.  It would be hard to match the quality of this stuff with a storebought alternative, but if you don’t have a pile of veal bones and a day or two to make your own, I’m sure some stock from the local butcher, or as a last resort the grocery-tetrapack variety beef stock would probably get you by.

On to the Marinade!
So I mentioned the marinade – chop up some vegetables like carrots, celery, parsnips, onions, and garlic and toss them into a tupperware container with the beef ribs.  Add some kosher salt and pepper, and any other herbs you like – I used Thyme and Rosemary – just throw the whole sprigs right in, don’t be shy.  Cover with GOOD red wine (keep a little for yourself!) and put in the fridge over night.

On the day of the braising, remove the short ribs from the marinade and allow them to drain on a plate (hang onto the marinade, you’re going to need it later).

Heat some oil on High in a cast-iron or heavy bottomed pan until just about smoking.

Rub the ribs with salt and herbs to coat – I used a mixture of coarse salt and crushed rosemary.

Sear the ribs until well browned on all sides – take your time here, this part is important!  Get your pan really hot and when you place the meat in the pan, make sure it’s got good contact and sear each side for a full 2 minutes.  It’s gonna get smokey, but it’s totally worth it!

NOTE:  I used my cast iron pan for searing, and then I moved the ribs to a bigger pan that I was going to use for the braising – if you have a big enough cast-iron pan, by all means don’t do the shifting around that I did – just move the ribs to a plate after searing and return them later.

After the ribs are all seared, move them into the braising pan (or set them aside).  Reduce heat to medium and add the reserved marinade and vegetables to the searing pan.  Cook until reduced by about half, being sure to scrape up the bits of flavour that’s been left behind by the searing.

Add stock to the pan – I think I added about 7 or 8 cups worth – and bring to a boil.  Pour the liquid over the ribs (or return ribs to the pan) – the stock/broth should just about cover the ribs -add more stock or water if needed.  Cover the pan and braise it in a 350 degree oven for 3-4 hours.  Test for doneness with a fork – the meat should be really tender.

NOTE: Yes, you can eat the ribs now, but if you want them to really be something special (and you know you do), allow them to cool in their juices (as below) and then store them covered in the refrigerator over night.  This helps to build anticipation, but it also really packs those ribs with some serious flavour.  We ate some the night of the braising, but left some overnight – and the ones we had the next day were just SO much better.

Let the ribs sit in the pan for about ten minutes then transfer them to a plate.  Strain the vegetables and herbs and other bits and pieces out of the liquid, pressing down with a spoon to get all the delicious juices out of the veggies.  Return the ribs to the pan with the veg-free juices (I actually used a separate saucepan) and allow to cool, then cover and refrigerate overnight.

On the second day, skim off any fat that’s settled on top of the ribs and place the pan over medium heat.  Cook until the sauce is reduced by about half, approximately 45 minutes, occasionally spooning the liquid over top of the ribs.  Remove the ribs to a plate, and continue to reduce the sauce until it is quite thick – this stuff will be so packed with flavour, your mouth won’t believe it.

Serve with sweet potato mash (as seen at right), fingerling potatoes, or some other type of veg, or maybe even rice or noodles, and drizzle with the reduction from the pan.