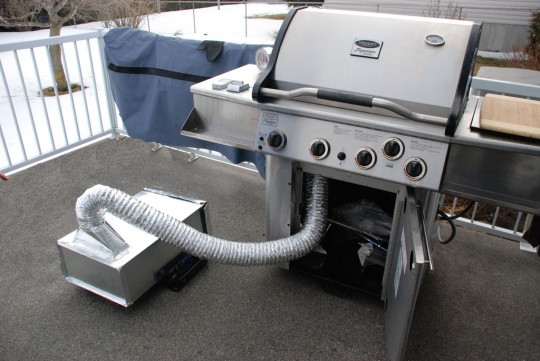 After several days of research, planning and preparation, FineDiner Dave and I got together at my parents place this weekend to smoke some bacon.  This article is the first in our three-part Makin’ Bacon Series.

Other articles in this series will explain the Curing process we used, as well as the actual Smoking and finishing of the meat, and we’ll probably get into some of the things we did with the final product.  One thing’s for sure, Makin’ Bacon is FUN and we’ll be doing plenty more of it!

We decided that we wanted to Cold Smoke our bacon.  You can hot smoke bacon, but then you end up cooking the stuff twice – once while smoking, and then again when you’re serving it.  Cold smoking preserves the moisture and fat in the meat while still giving it that great smokey flavour.

The trick with cold smoking is to make sure the temperature in your smoking chamber doesn’t hit more than 80 or 90 degrees – any higher and you get into risky territory in terms of the potential for bacteria.  Typically a cold smoke setup involves a smoking chamber where the meat is laid or hung, and a separate smoke generator that produces the smoke that will be piped into the smoking chamber.

Our master plan was to create the smoke generator using duct work from Home Depot, then pipe the smoke from that chamber into my dad’s Vermont Castings BBQ, where we’d lay the pork bellies.  Inside the BBQ, just to make sure the chamber stays nice and cool, we’d lay a pan of ice and snow to help cool the smoke as it enters the compartment.

Friday night, I went to Home Depot to pickup the goods. I purchased the following items to create the smoke generator:

The next day, Dave and I drove to my parents place to begin our adventure of  “MAKIN’ BACON”

After cutting the sheet metal we joined the 2 24″ pieces to create a box.

We then capped one end using the 8″x16″ Block End.

We sketched out where we wanted to have the smoke output (towards the capped end) and cut an appropriate sized opening for the boot, then we attached it and taped up the seams.

We then used the leftover sheet metal to fabricate an access door so we could access the inside compartment.  We cut a hole in this end for the vent which we’d use to regulate airflow.  (Lesson learned: do not use a plastic vent for this – see pictures below!)

Finally, we added the dryer hose to direct the smoke to the BBQ, using the heat-resistant tape to seal it up tight.

Once our build was complete we moved the entire assembly to my dad’s deck were we were going to do the smoking.

Version 1.0 of the smoke generator was an accident waiting to happen. We had placed the Butane Burner Stove directly in the box, not thinking of the incredible amount of heat that would build up inside.  Exposing the stove and butane canister to that kind of heat nearly had disastrous results!

After noticing the oven had melted we went back to the workbench for some design modifications.

Version 2.0 – Instead of placing the Butane Burner Stove directly into the box we cut an opening in the bottom of the hot chamber to allow only the Grill portion of the range to enter the box. This was much safer.

We then placed a cast iron pan on the “now safe burner” and added wood chips for the smoke.

So now we have smoke being generated in the Hot Chamber which then cools a bit in our vent pipe before it reaches the BBQ where it passes through a layer of ice to cool it further before it hits our delicious pork bellies that are just waiting to be packed with flavour!