So it’s quarter to twelve, my buddy Marc shows up with thirty or so east coast oysters. Actually from the Mallet Oyster company in New Brunswick, they were the St-Simon ones. One of his co-workers is from the east coast and has access to the supplier that ships them directly  to Ottawa. I love oysters, so we proceeded to shuck and eat a dozen RAW.  Marc suggested we cook the rest. 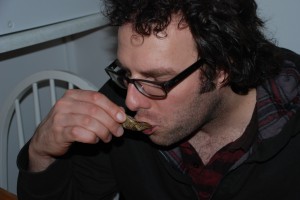 So I decided we would Rock a Fella! 🙂

Checked the contents of my fridge, which is usually pretty well stocked.

Sauteed all items above, deglazed the pan with a dash of white wine, added a bit of heavy cream. Then Blitz the mix in the Cuisinart.

Spooned the Mix onto the Oysters , added bread crumbs and a sprinkle of fresh parmesan. Voila the perfect midnight snack!