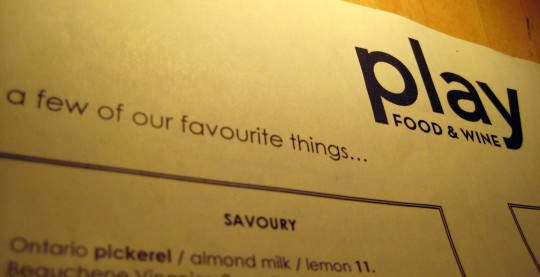 This was it’s second day open to the public. The setting is quite stylish.

Being an industry person (cook) I immediately made my way to the kitchen to check it out. The kitchen is open concept, with all the bells and whistles. Spoke with the Chef (Michael Moffat and his crew). They were excited, told them I was looking forward to “play with their food”

Once back @ the table we were greeted by our server Nick. His service was prompt but you could tell this type of setting was new to him.

I order a draft, Beau’s Bog Water, I love this beer. Actually enjoy anything from this brewery. My girlfriend (from Belleville) enjoyed a Prince Edward County Chardonnay by Hardie (2007) they don’t usually sell this by the glass but since I requested something from that region they made an exception.  We then debated what we were going to order. We started with 3 plates from the Savoury section of the menu.

I ordered the “Crispy Beef Short Rib” this was by far the best thing out of the kitchen. The texture was exactly as described “crispy” the content was very tender and properly braised. The truffled white been puree was tasty but cold, as was the actual plate it came on.

My girlfriend ordered “Ricotta Gnudi”, which was to her taste. The pasta was perfect, it was served with a brown butter sauce. She said it was salty. I’m a cook so i considered it seasonned appropriatly, I love salt! 🙂

Her friend ordered the “Seared Scallops” they looked awesome. Perfectly seared and seasoned.

I was watching other people order and eat their food. I don’t think Ottawa understands the concept of Tasting/Playing. The table beside us (a table of 2) order 4 dishes @ once. I was concerned for them that their food would be cold before they could enjoy it. I suggested to our table that we take our time enjoy the food/wine and ambiance. Total time @ this establishment was approx 3hrs.

We then ordered our second set of Savoury dishes. I ordered the “Hangar Steak” It was cooked to perfection, this cut of beef, if not prepared properly is thought as nails. The fritz were delicious. My girlfriend kept stealing them!

She ordered the “Wild Salmon” served with pesto and Horseradish potato puree, again the puree was cold. I would assume that the fact that the kitchen is a level above and they use a service elevator to expedite the food has to do with the temperatures of the dishes. I made the kitchen aware of this. Hope the get plate warmers or heat the plates in the oven before serving. They said that they couldn’t produce hot plates fast enough.

Her friend ordered the “Chicken-fried lobster” served with blue cheese grits. She said the gritz were amazing!

As the night unfolded we were planing our next approach to the menu. We then proceeded to the Charcuterie section. I ordered the ” Berkshire chobal”. This sausage was awesome, loads of garlic. My girlfriend order the Foie Gras dish. Nick our server told us the night before there was a Protest against the use of Foie Gras. He said this increased the sales. Who doesn’t love it. Her friend order the Prosciutto with grilled figs. They have this awesome “old school meat slicer” @ the bar. Quite the show piece if your a foodie or a cook!

Stephen came to chat with us, I told him I was going to try his extensive Cheese selection. He gave us a glass of one of the best desert wines I’ve ever had, on the house . Can’t remember the name of it, as this was late into the night and the Beau’s had been flowing.

I wanted a soft buttery cheese, Stephen personally chose one of the cheeses for me. Again can’t remember the name!  The others were Tiger Blue/Penticton BC and Cendre de Lune/Warwick QC. My favorite was the one he chose. It was oozing on the plate. 🙂

The girls order the Creme brulée, it was hazelnut flavoured.

All in all it was a pleasurable experience, and we’ll be back.

One side note. I would suggest that if you visit this establishment on a cold night you ask to be seated away from the front door. There’s a crazy draft as the front door opens. We commented about it on the comment card. I’m sure this issue will be addressed as the server was already aware of this.