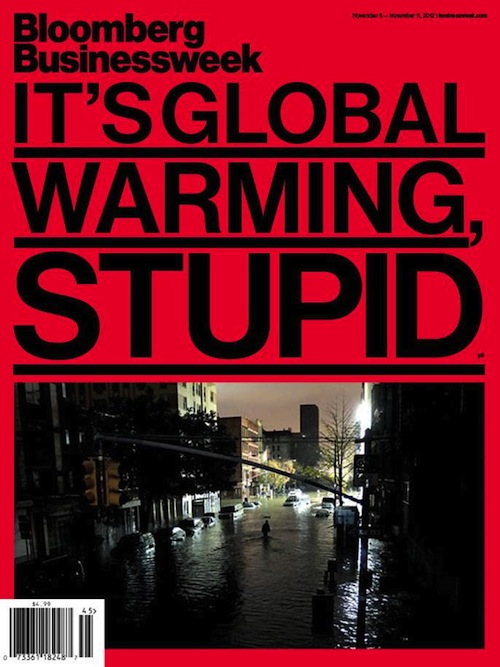 All it took was a major catastrophe on the eastern seaboard, but we’re finally starting to talk about the effect of climate change on weather.  Love this cover on BloombergBusinessweek, and it’s been very reassuring to see more and more recent news stories making the connection between Hurricane Sandy and Climate Change  (better late than never).

Yes, yes, it’s unsophisticated to blame any given storm on climate change. Men and women in white lab coats tell us—and they’re right—that many factors contribute to each severe weather episode. Climate deniers exploit scientific complexity to avoid any discussion at all.

Scientists have had a hard time making the argument for climate change because they’ve been worried about being precise – since you can’t draw a direct causal link between climate change and any one weather incident, they use caveats and language that belies the urgency of the situation.  But scientists are getting looser with language and more often are dropping the caveats, and getting at the issue in a more direct way.

An unscientific survey of the social networking liter moodature on Sandy reveals an illuminating tweet (you read that correctly) from Jonathan Foley, director of the Institute on the Environment at the University of Minnesota. On Oct. 29, Foley thumbed thusly: “Would this kind of storm happen without climate change? Yes. Fueled by many factors. Is storm stronger because of climate change? Yes.” Eric Pooley, senior vice president of the Environmental Defense Fund (and former deputy editor of Bloomberg Businessweek), offers a baseball analogy: “We can’t say that steroids caused any one home run by Barry Bonds, but steroids sure helped him hit more and hit them farther. Now we have weather on steroids.”

In an Oct. 30 blog post, Mark Fischetti of Scientific American took a spin through Ph.D.-land and found more and more credentialed experts willing to shrug off the climate caveats. The broadening consensus: “Climate change amps up other basic factors that contribute to big storms. For example, the oceans have warmed, providing more energy for storms. And the Earth’s atmosphere has warmed, so it retains more moisture, which is drawn into storms and is then dumped on us.” Even those of us who are science-phobic can get the gist of that.

See also this article at The Huffington Post where George Lakoff suggests we start popularizing the use of the term Systemic Causation to describe the connection between extreme weather and climate change:

Systemic causation, because it is less obvious, is more important to understand. A systemic cause may be one of a number of multiple causes. It may require some special conditions. It may be indirect, working through a network of more direct causes. It may be probabilistic, occurring with a significantly high probability. It may require a feedback mechanism. In general, causation in ecosystems, biological systems, economic systems, and social systems tends not to be direct, but is no less causal. And because it is not direct causation, it requires all the greater attention if it is to be understood and its negative effects controlled.

Above all, it requires a name: systemic causation.

“Climategate” deflated, but the damage is done

“A lie can get halfway around the world while the truth is still putting its boots on.”

Some media outlets have finally come around to admitting their mistake in the “Climategate” fiasco, but it may be too little, too late.  After the computer break-in that revealed supposedly damaging emails from scientists at the East Anglia Climate Research Group, much of the media perpetuated the same mess of errors and misrepresentations, mostly cherry-picked quotes taken out of context and spun to support the anti-science crowd’s suspicions of the “Global Warming Swindle.”

Since then of course, the scientists involved have all been cleared and people who actually read the emails and took the time to understand the context have revealed “Climategate” for the shameful spinfest that it was.  Of course, that hasn’t stopped the deniers, and unfortunately the damage done is not so easily undone.

I’ve been following a really great series on YouTube, Greenman3610’s Climate Denial Crock of the Week with Peter Sinclair.  Sinclair does a great job of taking apart the “Climategate” claims in the following short set of videos, and has some fun doing it too.  Be sure to pass these around to the deniers in your life.

Elsewhere: When Fat-Free Makes No Sense

…or Why I NEVER Buy Reduced Fat Sour Cream!  From the always great Fooducate Blog:

Regular’s Ingredients [3 of them]:
Cultured pasteurized grade A cream and milk, enzymes.
…

When something as simple as Sour Cream is re-constructed in a science lab, something is definitely lost (and a helluva lot of chemicals gained).