Home » In The Kitchen – Bacon Jam!

In The Kitchen – Bacon Jam! 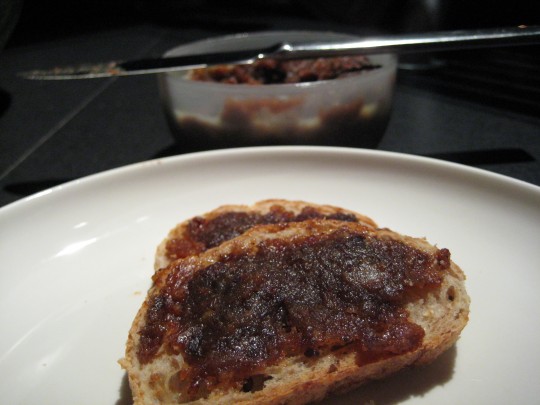 This is my new favourite thing.  I heard the name mentioned a couple weeks ago and immediately wanted to make it, and it’s all I could have imagined it would be.  It is smoky and sweet and delicious!  You will eat everything with Bacon Jam on it from now on.  Here’s how you make it:

If you’ve cooked with me recently, you’ll know that I don’t really follow recipes religiously – they’re just kind of a starting point –  a place to get ideas.  So sorry that I’m not very specific with the details here.  If you need more specific directions, I’ve included some Bacon Jam recipes that I used for inspiration down below.

First render down some bacon in a heavy pan over low heat until it’s nice and crispy.  I used about a pound of the Bacon that Finediner Eric and I made in the spring – smoky deliciousness!

Remove the bacon from the pan and reserve.

Chop two yellow onions and cook them in the bacon fat, making sure to scrape all the bits from the bottom of the pan – cook until the onions are well caramelized and sweet.

Add about two tablespoons of brown sugar and stir until combined.

Put the onion mixture and bacon into a food processor and blitz until the desired consistency.  I left mine nice and chunky for a more rustic feeling, but you can make it as smooth as you want it.

Pour everything back into the pan, add about a tablespoon or two of honey and cook again until it’s reduced a bit more – we’re looking for a fairly thick consistency here.

Stir in a tablespoon of butter and adjust seasoning if necessary.

Enjoy on literally anything!

Most of my inspiration for this came from this recipe by Kevin on this season’s Top Chef.  I actually followed his technique pretty closely, other than I did all of my cooking on the stovetop.  I also had the following recipes open in other browser tabs as I was working: