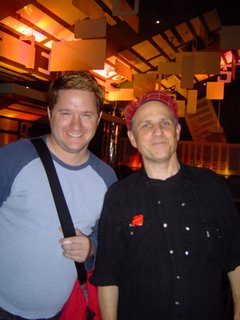 Ok, some more quickie reviews – I promise, I’ve been taking notes and will try to expand on some of this stuff later. I’ll just start with a note about today: I met and had my picture taken with Bobcat Goldthwait at the screening of his film, Sleeping Dogs Lie. I was so totally giddy about meeting him too – I totally grew up on the Police Academy movies, and practically everything else he did in the 80’s. I’ll post the picture when I can. So here’s a quick rundown of the films we’ve seen the past two days:

Everything’s Gone Green
Written by my favourite writer ever, Douglas Coupland, I couldn’t not like this. Classic Coupland all the way. Unfortunately he wasn’t in attendance – I’d have liked to have heard from him. Paulo Costanzo was in attendance.

Mon Meilleur Ami
This was definitely a highlight of the festival for me – our first Gala screening at Roy Thomson Hall. Unfortunately, Daniel Auteuil couldn’t make it, but director Patrice Leconte and co-star Dany Boon were there, and Dany was rather entertaining beforhand as well. A very touching, heart-felt film about friendship.

Loved this film. Written and directed by Bobcat Goldthwait (did I mention I met him?), this film is about what happens when you don’t leave the proverbial sleeping dog lie. You know in a relationship, that inevitable point where one partner asks the other, “tell me a secret from your past.” And your answer is supposed to demonstrate your absolute love and trust of each other – that you can tell each other anything. In Sleeping Dogs Lie, Bobcat Goldthwait asks and answers the question, “What if the answer to that question is something so unspeakably horrible that it could tear your life apart?”

Summer Palace
We picked this one up with our vouchers. I really wanted to like this film. Maybe I was just too tired.

S&MAN
Another midnight screening, this was a last-minute selection today to use up our other vouchers, and I’m really glad we caught it. It’s a documentary about underground horror film and what the horror genre says about a society that produces these kinds of films. Specifically, he speaks to a handful of film makers who are responsible for some of the most messed up horror flicks you will ever see. I want to tell you more about this flick, but I can’t. Just see it.