I support this protest 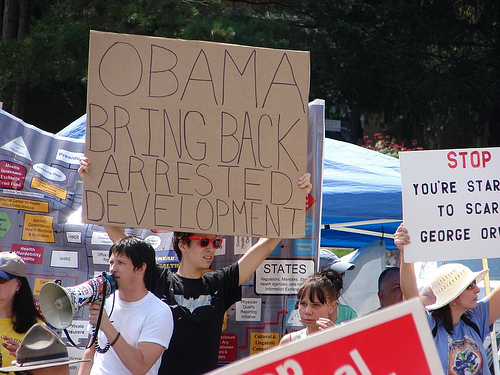 The Dead Weather will at Ottawa Bluesfest on July 19 at 8:00 pm

Ice Cube is performing at Ottawa Bluesfest on July 14 at 7:00pm

My latest post over at FineDiners.ca wherein I make French Onion Soup for the first time!

FineDiners.ca is a food-oriented blog where myself and a few others write about restaurants around Ottawa, recipes we’ve tried or want to try, general food preparation techniques and other food news, reviews, and kitchen experiments.

What’s so great about The Wire?

UC Berkeley is offering a course on The Wire:

“Discerning critics and avid fans have agreed that the five-season run of Ed Burns and David Simon’s The Wire was “the best TV show ever broadcast in America”–not the most popular but the best. The 60 hours that comprise this episodic series have been aptly been compared to Dickens, Balzac, Dreiser and Greek Tragedy. These comparisons attempt to get at the richly textured complexity of the work, its depth, its bleak tapestry of an American city and its diverse social stratifications. Yet none of these comparisons quite nails what it is that made this the most compelling “show” on TV and better than many of the best movies. This class will explore these comparisons, analyze episodes from the first, third, fourth and fifth seasons and try to discover what was and is so great about The Wire. We will screen as much of the series as we can during our mandatory screening sessions and approach it through the following lenses: the other writing of David Simon, including his journalism, an exemplary Greek Tragedy, Dickens’ Bleak House and/or parts of Balzac’s Human Comedy. We will also consider the formal tradition of episodic television.”

Loved this show!  It really is the best thing that’s ever aired on tv.  [via Kottke]

This article about How Porsche hacked the financial system and made a killing is really fascinating.

So sorry, so sorry…

Man, time gets away from me sometimes.  Never got around to a wrapup post for TIFF. Needless to say, the last bunch of days were kind of a whirlwind.  I’ll write more soon, but suffice to say – we had hella fun the whole week, and I can’t wait to go again!

Some more great press for Tkaronto which starts its run at The Royal in Toronto tomorrow evening:

The Globe and Mail: “I didn’t have time to filter”

And one I missed last week:
The Ottawa Citizen: Caught between ‘two worlds’